Posted on November 20, 2010 by Laura Rittenhouse

I’ve been slowly moving plants from outside to inside as I salvage them from the garden chaos. Some of them had lived inside before we moved to Darwin and I set them, pots and all, into the garden in hopes that either the tenants would adopt them or at least God would rain on them. It appears they were dependent on the latter. Others have always lived outside but that doesn’t stop me from kidnapping them if I think they look healthy enough. This post has a few that I want to monitor over the coming months. Others are succulents and are easily replaced from their clones in the yard or herbs that are quite frankly not doing well inside. 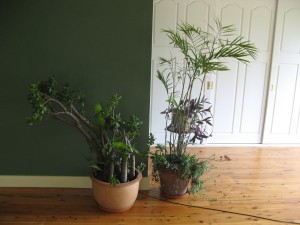 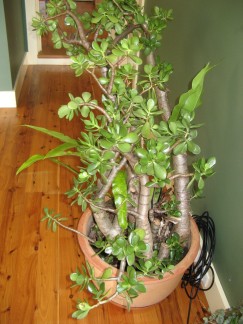 The jade plant was in a huge pot by the front walk and was tipping over and breaking apart. Frank and I split it into 2 pieces, cutting the roots with a saw. One half stands in a pot outside, one half is now inside. The “surgery” took place this week. We’ll see how it survives.

Ditto with the poor birds nest fern that somehow made a home inside the jade plant. It loves shade and humidity. Well, it’s getting plenty of shade. 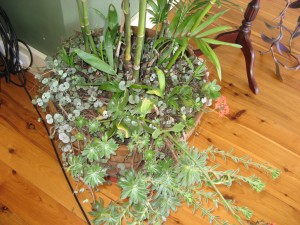 The palm has been living beside our outside stairway since we moved into this house – not sure where the prior owners kept it. It varies between lush and tragic. We thought it was time to give it a try inside. There are a lot of small shoots so hopefully it will fill out.

That purple thing (Tradescantia pallida ‘Purple Heart’ or ‘Purple Queen’) on a stand behind them is some sort of indestructible weed but it’s pretty, hardy and gets nice little pink flowers. I’m pretty sure it will be the last plant standing. 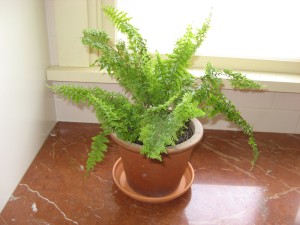 This pretty little fern  (fluffy ruffle fern or Nephrolepis Exaltata?) was refusing to die in a hanging basket that was crumbling. I’m giving it a new lease on life in the bathroom.

I'm an American-Australian author, gardener and traveller. Go to my writing website: www.laurarittenhouse.com for more. If you're trying to find my gardening blog, it's here.
View all posts by Laura Rittenhouse →
This entry was posted in Garden and tagged fern, house plants, Indoors, jade plant, planted, shade, succulent. Bookmark the permalink.