Back in the garden 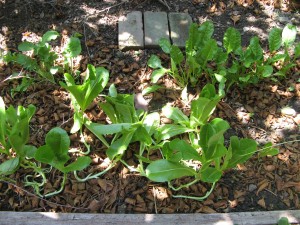 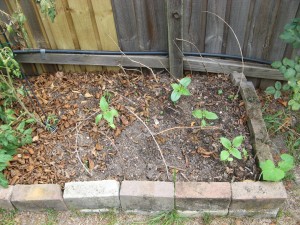 I’ve stayed out of the garden for a few weeks now. Mainly because of the weather. After those days in the 40s, everything suffered, wilted and much died. Add to that the fact that there’s been zero rain and gardening seemed like a mugs game. So I pulled out a few dead things (or stupid plants like my radishes that NEVER bore fruit but also never died), did some minor weeding and watered every day waiting for the heavens to align and the time to be right to get back in the garden.

The results can be seen above. My perpetual leafy veggies are hanging in there – just. That’s rocket, spinach and lettuce. We’ve eaten from all of them but hardly in bounteous portions. The photo on the right shows sunflowers which were planted on Feb 17th (a good day according to the lunar calendar). 3 rows of them. Ha. I have about 3 sunflowers coming up.

Check out the parsley below. It’s seeded (I don’t want to say it self-seeded as I did harvest and then spread out the seeds, but close enough) and is sprouting here and everywhere else I threw it. I think we’ll have more parsley than we know what to do with in a few weeks. If only we could keep Tash out of here. Her new favourite litter box is the parsley bed, hence all those sticks.

I did use Scat again to deter her and I’m pretty sure it works, not because of this bed but because she used to sit under the bird bath every morning and I sprinkled a good dose around there. It seemed just wrong to attract birds into the back yard and then to have a cat sitting in wait. She now sits under the hibiscus which is far enough away for them to be able to fly away if she attacks.

Another pest is something that digs up roots and either eats them or grubs (possums, rats, birds?). It’s gone after some of the silverbeet (which is barely hanging in there), the new tomatoes (they are almost dead now), and a couple of my ginger plants (which were totally out of the ground and lying on their side – I’ve replanted both and they look stressed but may make it).

The rest of the garden follows the same general theme. I cut back the cukes and zucchini and there are a few new flowers, but I don’t hold much hope of a real crop. Ditto on the tomatoes. We get about 1 a day which isn’t horrible but not great. The basil continues to go from strength to strength. The eggplant remains about 4 inches high neither bearing fruit nor dying. Never did get a spring onion. The peas just didn’t flower much in the heat. It goes on and on.

Lo, yesterday we had a good 15-20 minutes of rain (beggars can’t be choosers in this climate) which moistened the soil and actually put enough rain in the rainwater tanks so that we can start filling watering cans again. Still not close to enough to use the gravity fed hose, but at least we don’t have to turn on the city water tap which we did the last day before the rain (and that was painful).

On top of the rain, the lunar calendar tells me this is the last day of the new moon phase which is the best to plant leafy annuals so I figured it was now or never.

I put a dozen or so more sunflower seeds in the sunflower bed – half from the package, half from the harvested plants. Then I started a seedling nursery in 2 plastic trays (below). I filled them each with compost, 3 handfuls of river sand and some water crystals. I watered them till they were soaking and let them stand for a couple of hours before planting.

I’ve decided to try planting seedlings in a tray then moving them into the garden. I’m hoping I can control the climate, water and pesky seed eating animals better that way. Many of the seeds say plant directly into the ground where they are to grow, but I’ll try this method and see if the loss during replanting (something I’ve always struggled with) is a bigger problem than whatever has kept things like tarragon from so much as sprouting.