Is there a Bandicoot in my garden?

Posted on April 3, 2011 by Laura Rittenhouse

I didn’t take this photo – I’ve never seen the creature that I’ve been talking about as a pest who was digging in my garden. When the long dry spell was at its worst, something seems to have moved in and feasted mainly in my ginger bed. Since the rains have returned, its hunting ground has grown.

After lots of time surfing the web, I’m convinced a long-nosed bandicoot is living in my back yard. 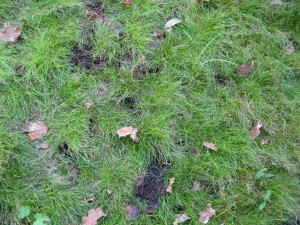 I’m not sure but s/he could be living under the mass of bromeliads behind the compost. There is a bit of a well-worn path leading back there. Their nests are reportedly small and well hidden. I have no intention of poking around looking and running the risk of chasing him/her away.

So I’m relying on the evidence that is everywhere in my yard. 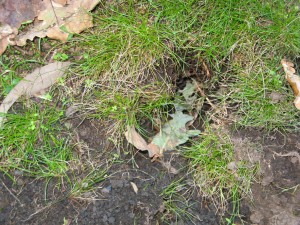 Besides patches of conical-shaped shot-gun holes in the grass, there are a few bigger ones that I first thought were signs of something living underground, but they end with a little snout-sized hole, perfect for a bandicoot.

Reports are this is how they dig for grubs, worms and borers. Their delicacies.

My final evidence is the scat. I’ve seen these droppings all over the yard for a couple of weeks and attributed them to possums (they were too small for cats) but now, thanks to the internet’s description of long-nosed bandicoot poo as “bullet shape; insect casing often visible” I’m thinking it’s not a possum.

Bandicoots are rare in this area but are reported to be a gardeners friend. They leave holes all over the yard where they remove grubs (and sometimes roots – hmmm, do you suppose they like rhubarb corms?). At first Frank and I thought the diggers were birds, but the holes always materialised overnight – so not a bird. I thought maybe a snake or a rat of some kind but it was happening so extensively I finally began my internet hunt.

Long-nosed bandicoots used to be widespread in this area but thanks to development, cars, cats and dogs, their numbers are reducing. They’re about the size of a rabbit (31-43 cm), they’re a nocturnal marsupial (they have a pouch) and live alone, meeting up only for mating.

I’m now keeping my eye out for the neighbour’s cat Tash and I’ll keep chasing her away whenever I see her. I hope my bandicoot is big enough to deter a Tash attack, but I worry about any young.

As for chemicals in my back yard, never liked them, now I’m definitely not going to spray anything. My definition of pests just might be a bandicoots definition of a good meal.

Update: I’ve had an unusually high number of hits on this post so I’m guessing a lot of people are investigating those holes in their back yard. I feel it my civic duty to include a way to get rid of bandicoots if you’re so inclined (I’m not – still loving hunting for evidence of his nighttime escapades each morning). To encourage a bandicoot to move elsewhere you can put a bright light where he hangs out, they don’t like light (neither will your neighbours or your carbon footprint so this is not my fav suggestion). You can also scatter chicken poo or Dynamic lifter since these have an ammonia smell and bandicoots have a sensitive nose (I wonder if other, self-produced ammonia smelling products might also work). Whatever you do, don’t trap or try to interfere directly with bandicoots – they’re a protected species. I’m sure if you have real angst, you can look up a local wildlife rescue service and they might consider helping with a relocation. But really, I suggest you try doing a morning walk looking for evidence, enjoy the hunt and realise that most traces are gone within 48 hours – how much of a bother is that?

Update 1 August 2012: Last night it finally happened, I saw my backyard bandicoot. There was a ruckus in the back garden – we thought it might have been a possum fight (it might have been) – and Frank went out to investigate. We didn’t turn on the back light so as not to scare whatever it was, Frank grabbed the head lamp off his bike and carried it into the yard. Two minutes later he gave a loud whisper at the back door for me to come down quick. I followed him and he turned on his torch like a spot light and there, in the centre of the beam, was the cutest little bandicoot you could ever hope to see. It was smaller than I expected, a bit longer than my hand I suppose, and very delicate looking. I’ve no idea if this was a mature bandicoot or maybe a teenager or what, but it was happy in my back garden which made me happy.

As quickly as I could whisper, “Oh, how cute”, he scurried (somewhere between a bunny-hop and a cat-dash) away into the dark shrubbery behind the chicken run.

Whew, 1 1/2 years of keeping an eye out at night and monitoring the ever-increasing number of holes in the morning and I have finally seen my bandicoot. I didn’t get a photograph and I don’t expect I ever will get one, but I am content even with no evidence.

I'm an American-Australian author, gardener and traveller. Go to my writing website: www.laurarittenhouse.com for more. If you're trying to find my gardening blog, it's here.
View all posts by Laura Rittenhouse →
This entry was posted in Garden, Nature and tagged bandicoot, native animals, Pests. Bookmark the permalink.

100 Responses to Is there a Bandicoot in my garden?