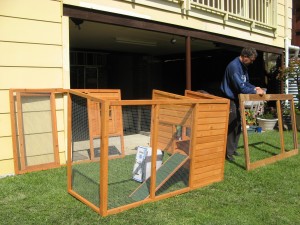 We bought a “chicken coop plus run” kit from Bunnings that contained a large jumble of parts collected from two separate returns, neither of which was a complete set. We got it for less than half the price of a single kit and trusted that we could create any missing bits. As it turns out, we had enough to build a double-sized coop with a little modification. 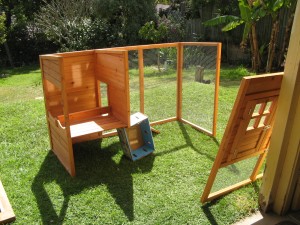 Something about a “little” modification has turned a two-hour project (that’s what it took for me to help Frank build the basic coop) into a week-plus project to have a free-standing coop plus run. 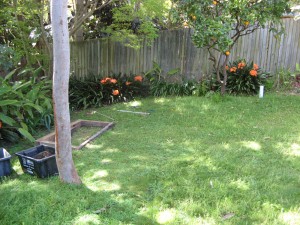 Part of the delay was, no doubt, the need for some foundations for the coop. These are required to a) compensate for the sloping ground so the coop will be level, b) provide part of the fox-proofing for the coop and c) make the coop sturdy enough to satisfy Frank (who over-engineers everything – just to be safe).

Here’s the beginnings of foundation 1 (remember, it’s now a double-coop) located in the area where the chickens will happily live out their full and egg-filled lives. The packaging says “coop plus run” but no way is that run big enough for happy chooks. We’re going to fence in a much bigger area so free-range resembles something like ranging freely. 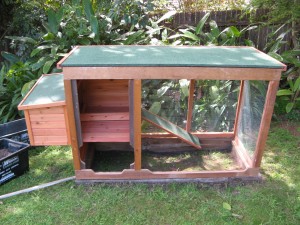 Here’s the “completed” first half in-situ. Levelling that foundation took approximately 3 life times. Only out-done by levelling the second foundation. I am not exaggerating when I say the chickens will have a much squarer home than we have. But, as Frank points out (when I’m silly enough to comment on his perfectionism) why not do it right the first time? 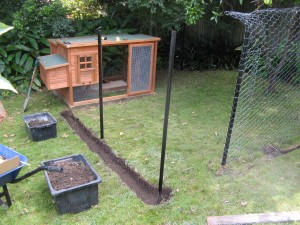 It’s now almost exactly 6 months later and we’re back in the garden working on the chook run (the double coop is done and in place). I started preparing this post in mid-September and now it’s mid-March. An unplanned trip to Europe put our chicken prep on hold. The upside is that now we’ll get our chooks in Autumn which means they’re more likely to keep laying like maniacs through Winter. 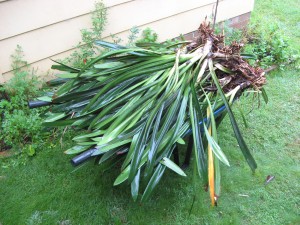 Frank’s been digging trenches under the fence for the run and burying the wire so no foxes (which would never come to our yard, but better safe than sorry) can dig under. Yesterday he dug out the last batch of Clivias that would have been in the chook pen. This photo is about half of what we had to get rid of – they can be seen in bloom in one of the photos above. I’ll miss their beautiful display but Clivias are poisonous to chickens. Luckily Linda wants as many plants as we can give her so they’re finding a good home.

There’s just a little bit of fencing left to go and then Frank has to figure out how to make a gate. We may opt for something temporary and force our chickens to live in less than 5-star digs for a while. I’m sure they’ll cope.

We set a goal of getting chickens before the end of the month and it looks like we’re on track to do just that. Eggs Benedict anyone? 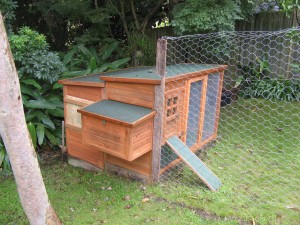 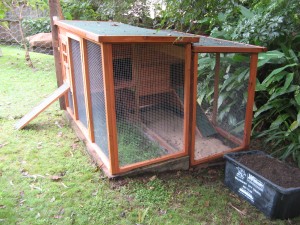 I'm an American-Australian author, gardener and traveller. Go to my writing website: www.laurarittenhouse.com for more. If you're trying to find my gardening blog, it's here.
View all posts by Laura Rittenhouse →
This entry was posted in Chickens and tagged chickens, installation. Bookmark the permalink.