Posted on April 3, 2012 by Laura Rittenhouse

All the concerns I had about the abilities of my chickens to eat greens in their debeaked state have vanished. It seems that before they came home with us, they’d never been given anything that didn’t come out of a feed bag. Now, with a little practice, they’ve become real pros at devouring leaves and grasses and have developed quite sophisticated tastes. They love Brassicas (cabbage family) and are ruthlessly devouring the ruby ginger, but the Agapanthus and prayer plants they’re leaving alone. They are more successful when the leaves are attached to a plant, or I hold on to the leaves, but they will eventually get through a loose leaf on the ground (if they like its taste).

My second concern was that they’d rip the grass out by its roots or scratch it all up and be foraging in a mud pit within weeks. But instead, they graze along the surface of the grass, leaving the roots in tact to keep growing (fingers crossed this lasts). 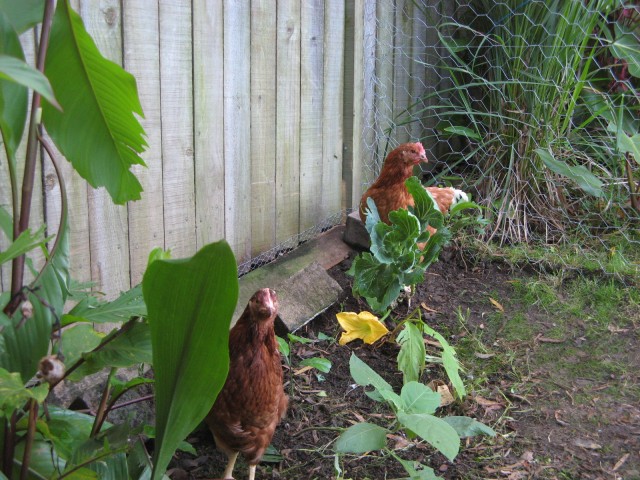 Here’s an old Brussels sprout plant we dug up and transplanted into the chicken run.

When we gave them a second plant, 2 days later, they had it pretty well stripped in a couple of hours. They’re really getting the hang of leaf ripping! They often reach a frenzied state where the rip and drop and rip again. But they don’t waste much, the torn bits of leaves lying on the ground were almost totally gone by the end of the day.

The ruby ginger is the plant to the left that is slowly being stripped of all greenery. It must taste okay. Not as good as cabbage, but okay.

And, when there are no tantalising dandelions or cabbage plants to keep the girls occupied, they are content to munch on grass. Of course, outside of the fence is where we’ve planted the good stuff.

I'm an American-Australian author, gardener and traveller. Go to my writing website: www.laurarittenhouse.com for more. If you're trying to find my gardening blog, it's here.
View all posts by Laura Rittenhouse →
This entry was posted in Chickens and tagged chickens. Bookmark the permalink.