Killing of the Drones

Posted on March 3, 2013 by Laura Rittenhouse

Okay, I’m still learning about beekeeping and I’m trying to harden my heart, but man, bees can be ruthless.

Here is what I believe to be a killed drone pupae. See the white pupae just left of centre in a row with 2 worker bees just being born? You can see his capping is higher than his neighbour’s indicating he was a drone (or I’m pretty sure anyway). I’ve read that when the bees decide they don’t want so many drones in the colony they not only kill the living drones by pushing them out of the hive where they starve and/or freeze to death (with autumn here I guess this is something that will be happening en masse soon), they also uncap the unborn drones which kills them.

Worker brood hatching with a dead, uncapped drone cell in the middle

There were a few more of these (on the right under the worker bee) and we poked at them with a match stick to see what they were. Just a dead pupae, no obvious disease which pretty much confirms my accusation of murder.

Here’s a bunch of healthy capped worker brood with some dead uncapped drone brood scattered around – this is genocide! 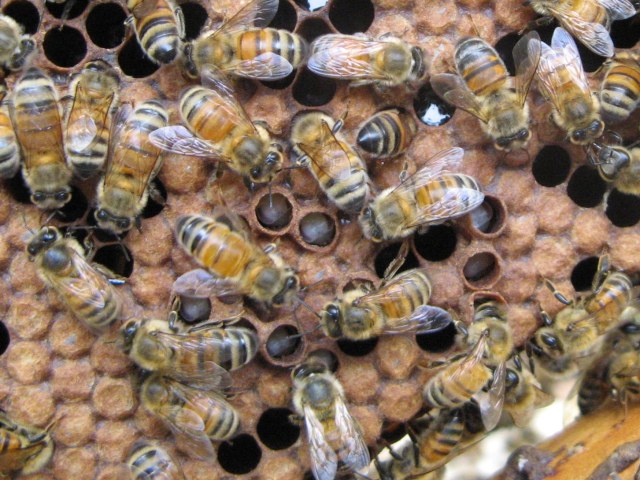 This killing of the drones is perfectly natural. Bees keep drones around to mate with queens (hopefully not their own queens, but queens from other hives) should a queen make a mating flight. In spring and summer when swarming takes place, drones are built up to provide a good stock for mating. As autumn approaches (or, whenever they feel like it) all the girls in a colony of bees reach the same conclusion; males are lazy slobs who eat and take up space and are really more hassle than they’re worth. The girls then go on a seek and destroy mission around the hive. Okay, maybe they have a point, but still…

I'm an American-Australian author, gardener and traveller. Go to my writing website: www.laurarittenhouse.com for more. If you're trying to find my gardening blog, it's here.
View all posts by Laura Rittenhouse →
This entry was posted in bees, Nature and tagged bees. Bookmark the permalink.

16 Responses to Killing of the Drones