Rusty and the chooks – waaaayyy too much interest

I have chickens and I have a dog. That combination was tried and failed miserably in the past. We put a lot of effort into finding a dog that would make the combination more successful. Rusty had zero interest in poultry when he was a pup. Then he grew up and bird chasing became a great hobby. The cockatoos on the farm see him running and take flight (well, there was one old, sick bird that didn’t take flight, but I saved him by shouting at Rusty who actually dropped the poor thing).

Rusty, so innocent in appearance

I struggle with and try to stay on top of Rusty’s interest in my chooks – not that I’ve had huge success. He no longer jumps on the chicken wire surrounding the run when I’m inside with the chooks, but he watches them too keenly for my taste. And if anything “exciting” happens in the chook run which causes flapping and squawking, and general chicken frenzy, well, then all bets are off.

That’s one half of the nightmare scenario. 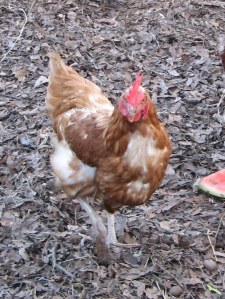 Holly – a month before the incident

My chickens are not really pets. All 6 of them were adopted when they were well beyond chick stage (3 were 2 years old, 3 were 3 years old when we got them). They are sweet things but not keen on being held and avoid contact. Except when I open the run and they’re expecting goodies. Then they cluster at the gate. Holly, being more foolhardy than the others, even tries to peck a few blades of grass outside the run when the gate’s open. Sometimes she tries to make a break for it but I scoot her with my foot. You’d think she’d have learned because she escaped on day one using this sneak-out-the-gate method, only to be captured and carried by Rusty. But I think she’s forgotten.

That’s the 2nd half of the nightmare scenario.

Rusty = match, Holly = fuse. An explosion waiting to happen – and it did.

Holly was a bit faster and more persistent than normal Sunday morning and out she darted. Rusty, on my heels, grabbed her and took off. I shouted, he ran faster. He paused and loosened his hold on Holly (because I yelled “leave it”, to adjust his booty or to catch his breath?). She flapped (bad mistake). Rusty grabbed again and ran again and I kept yelling and chasing. 99% of the way around the run, just outside the gate, he paused again (again, why?). I got him to release Holly (it’s all a blur) and held his neck to the ground scolding. Holly waddled away. I started to drag Rusty to his run (he wouldn’t walk – I think he knew I was unhappy; I wouldn’t let go of the scruff of his neck – he was right, I was unhappy). My plan was to lock him up and then try to capture Holly. She waddled into Rusty’s run (I’m serious, this chook has a death wish). I went into the run telling Rusty to sit and stay (yeah right). 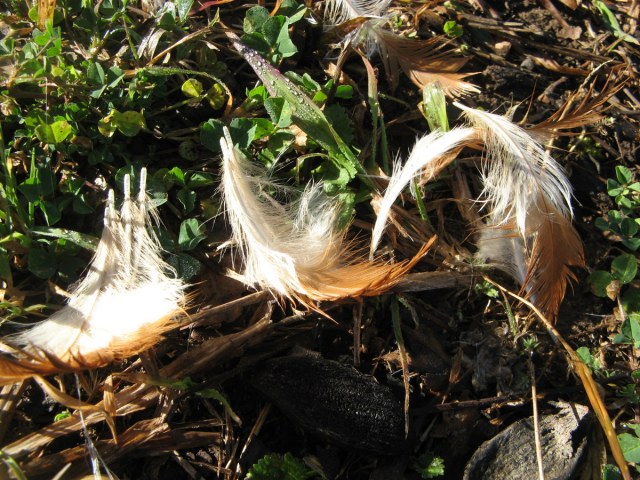 Rusty lunged at the fence of his run, Holly fluttered, Rusty lunged some more. Somehow I caught the bird and she settled right down (surrender or did she sense a rescue?). She seemed okay. There was a drop of blood on the top of her head and she was ruffled but otherwise I didn’t see any problem. I didn’t want to investigate too much figuring emotional trauma was the biggest concern. I’ve heard chickens die of fright quite easily.

All through this drama, Lenny was screaming at the top of his lungs in the chook run. He didn’t like his girlfriend being eaten (rather gentlemanly of him if you ask me). I plopped Holly back in the run and she waddled to the corner with Lenny clucking behind her. She sat and contemplated. He stood guard.

I fed the chickens and gave them fresh water (Holly loves fresh water – I overflow the containers so she can dig in the mud – she didn’t). She sat and contemplated some more. Lenny stood guard some more. 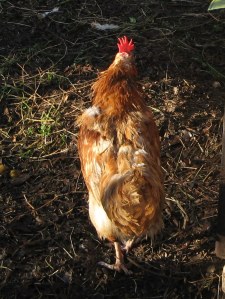 Ruffled and missing 1 drop of blood 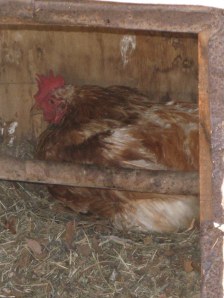 About 30 minutes later I went down to see how Holly was doing. When Lenny saw Rusty in the distance, he raised the alarm. I made Rusty sit and stay – this time he did (he was far enough away to be able to control his enthusiasm). Holly had moved about a foot from her corner. She waddled into the nest box when I got too close.

She looked okay. Ruffled and stressed no doubt, but she always looks ruffled (she really needs to get her new feathers) though stress is not her MO. I think she even laid an egg a few hours after the attack (I guess it was well progressed), but skipped Monday. On Monday morning (yesterday) she was subdued but, by the end of the day, she was back to chasing Molly away from the warm mash I’m making them every day (Molly is sick and it gets cold at night). I’m making Rusty sit and stay well away from the run every time I go down to the chook run and he obeys. Everything is pretty calm just 48 hours after the incident. So I guess that means it’s closed.

As to what comes next, I guess Ever Vigilant will be my motto. And to think my dream was that my dog, who had no interest in poultry, could wander the farm with my free ranging chickens protecting them from the foxes. No free ranging for my birds 😦

I'm an American-Australian author, gardener and traveller. Go to my writing website: www.laurarittenhouse.com for more. If you're trying to find my gardening blog, it's here.
View all posts by Laura Rittenhouse →
This entry was posted in Chickens, dog and tagged chickens, dog. Bookmark the permalink.