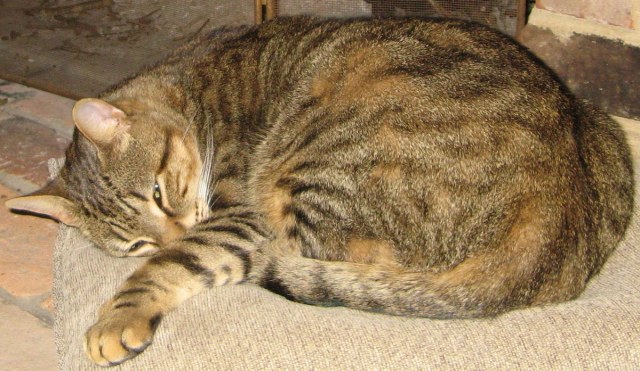 I don’t post very often about my cat, Adler, because he’s kind of boring. Let’s face it, cats sleep a lot. And when Adler’s not sleeping, he ignores me, unless he wants food or to be petted or to be let out/in. You don’t absolutely need something goofy to happen to warrant a post but it helps. Adler is rarely goofy.  He walks around in a state of dignified aloofness. He acts like he wishes he lived alone and, even more than that, he often pretends he does live alone. So his antics are not as funny as those of my dog or my chickens and his dramas are not as stressful as my chickens or my bees – so why break out the camera? And I kind of have a rule, no photo, no post.

Then I got out a couple of boxes to put stuff in (as you do) and Adler jumped up on the table to see what these great new cubby houses were all about. He hopped into the smaller one (that I hadn’t put stuff in) and tumbled with it to the floor. I figured that would be the end of that but nooooo, Adler crawled in and stared at the dog in one of his, “I’m invincible and I’ll scratch your nose if you don’t believe me – please don’t believe me,” stares.

Rusty did believe him and left him alone and eventually Adler wandered away giving me the chance to put the box back up on the table – on its side this time just in case. Turns out that was a good call on my part because Adler just couldn’t stay away.

For a nanosecond I considered leaving the box indefinitely on the table so he would have a permanent cubby but then I remembered that Adler’s infatuation with boxes (or any cubby) is short lived. Two, three days max of crawling in and staring out and he’s over it. 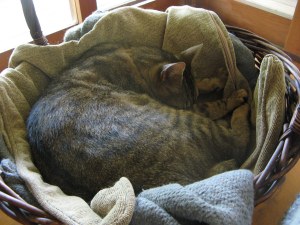 That happened with the lovely basket he slept in for the first few months after we adopted him. Then, suddenly, he wasn’t interested. I thought maybe he was getting too fat to fit but I threw my shirt in there before bed one night only to wake up to find him sleeping on it. Very funny, Adler. 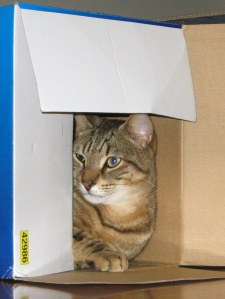 If I ignore her will she go away?

What cracks me up is how he tries not to look at me when I’m looking at him, even if I make silly noises that he really wants to stare at. Especially if I stalk him with the camera. It’s not that he’s camera shy, he’s just so bored with me thinking he’s beautiful – he knows he’s beautiful 🙂

He was fascinated with this paper box in the little corner beside the fireplace. He was pretty much out of sight, especially if he turned his back. Ah, a cat’s logic.

Adler’s penchant for finding a cubby to crawl into started before we adopted him and moved to the farm. We had mulched around the base of a cumquat tree and the chickens kept scratching the mulch and spreading it around the lawn so we put a low chicken wire fence around the tree. Heaps of times I spotted Adler napping in that little outdoor basket.

Poor Adler, back then all of his cubbies were outdoors because he was a stray and no one loved him enough to let him in their house. He had to make due with whatever was at hand, including our neighbour’s flower pots.

No roof, no walls but it will have to do.

I'm an American-Australian author, gardener and traveller. Go to my writing website: www.laurarittenhouse.com for more. If you're trying to find my gardening blog, it's here.
View all posts by Laura Rittenhouse →
This entry was posted in cat and tagged cat. Bookmark the permalink.

16 Responses to Cats and Cubbies