We have a variety of places for our chickens to lay but, being chickens, there is only one place they are willing to lay. Which creates a problem if you have 2 chickens who get the urge at the same time. This happened recently when Molly had settled in for a nice relaxing lay just before Holly, well ahead of her in the pecking order, realised it was her time too.

I couldn’t take my eyes off the scene. Holly was quite noisy and pacing in front of the box. She would hop in and out. She’d peck Molly who just ducked her head and stayed put. When confronted by Holly outside of the nest box, Molly runs away. Fascinating.

Finally, Holly couldn’t wait any longer and gave up her bullying approach. Nothing for it but for 2 hens to share the one box. They tried right then left, over and under, behind, in front. It was pretty darned funny to watch.

Below is the scene captured on my camera phone. Sorry for the quality, it is a phone and doesn’t have a flash. Not that I’d have used one anyway, the girls hate the flash and I wouldn’t want to disturb their laying – they were taking care of that all by themselves 🙂 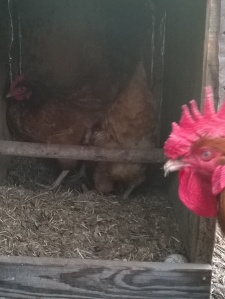 Holly, on the right, trying to boot Molly out of the box. Lenny is curious about his girls, but not curious enough to intervene. 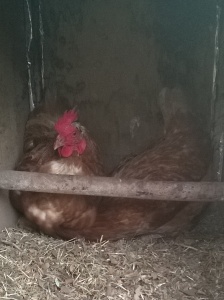 Molly, now on the right, knows that she wants to be under Holly – low is good when you’re about to drop an egg. Holly is none too pleased. 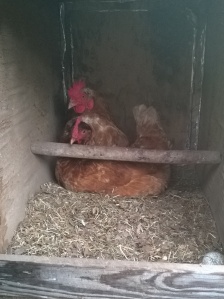 Ah, that’s better, Molly, now underneath, is content. I somehow doubt Holly is. 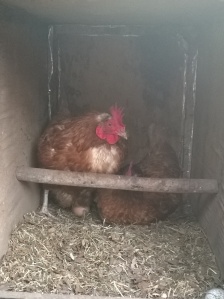 Holly doesn’t have time for more jostling. She stands up, puffs up (she was even bigger for a moment – I was too slow on the shutter) and drops an egg. 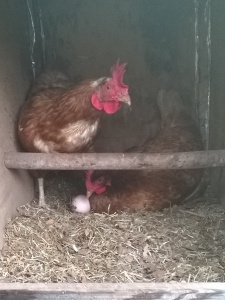 Mission accomplished. Holly can shrink back to normal size and rejoin the flock. Molly can pull Holly’s egg under her and go back to thinking about which came first, the chicken or the egg – or the nest box.

I'm an American-Australian author, gardener and traveller. Go to my writing website: www.laurarittenhouse.com for more. If you're trying to find my gardening blog, it's here.
View all posts by Laura Rittenhouse →
This entry was posted in Chickens and tagged chickens, eggs. Bookmark the permalink.

9 Responses to One Box, Two Hens