Where did that come from?

Posted on September 10, 2014 by Laura Rittenhouse

Walking the well worn path between my front door and the door to the chicken run I saw this lying in the grass. It was the middle of the day and it hadn’t been there in the morning.

What Large Teeth You Have!

From a distance I thought it was a big piece of bark, a large leaf or maybe some paper blowing around the garden. Then I got close enough to see it was a skull. I was slightly startled. I couldn’t imagine where it came from. And I wasn’t sure what type of animal it was (or, rather, had been). Those canine teeth sort of confirmed it wasn’t a sheep’s head. I figured it had to be either a fox or a dog skull. (Hardly Sherlock Holmes, am I – what else could it have been?). 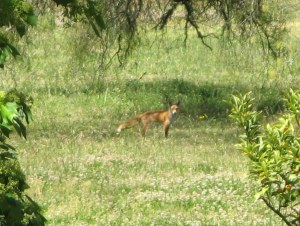 Red Fox in the garden

I came back in the house and looked it up online and I’m now wondering if it’s a pig skull (told you I wasn’t Sherlock). Those molars don’t look like they belong to a fox. We did have someone dump pig carcasses on the road – twice! (Humans are gross.) Could that have been the source of the skull? If so, what brought it inside the fox-proof fence? And what cleaned it up (what I saw on the side of the road before calling council to take it away was definitely not clean)?

I know we have a lot of foxes in this area, I’ve seen them several times in spite of the “fox-proof” fence (which may have been built to be fox-proof but I’ve filled holes dug under it twice). Has a fox been nibbling that skull for months and dropped on my lawn when I somehow startled it?

A good clue was found near the skull (and very near the chicken run – gulp). Rusty found a really stinky fresh-ish animal dropping. I mean REALLY stinky. It looked like the pictures of red fox scat I found online and a bit of further research confirmed red fox scat smells terrible. I wonder what the chickens thought when the fox was leaving that? I think it happened when I was at the shops at 1 in the afternoon and Rusty was locked in his run right next to the chickens.

The wonderfully stinky poo interested Rusty more than the skull (seriously, what is wrong with dogs?). He started to roll in it and got a quick bath for his trouble (I stopped him before he was covered but after he had a nice smear on his neck). Was the scat in some way related to the skull? Did whatever brought the skull leave the dropping? More worryingly, did I lock a fox inside the “fox-proof” fence when I blocked a well-used hole about a month ago? I’m concerned and curious in equal measure.

Rusty, however, is simply satisfied with the find. It rivals those rabbit heads in sheer goodness (though is disappointingly smell-free).

Satisfied but slightly worried – it’s the biggest thing he’s ever had to hide. Too big, apparently, to bury; he left it on the front lawn where he could easily return for more nibbling. 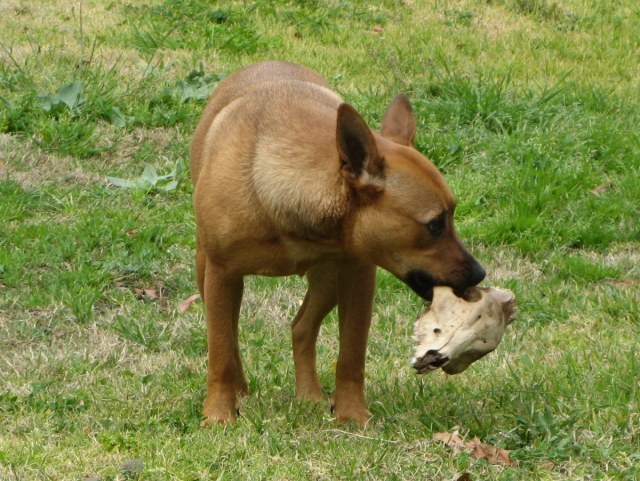 A few days later I found this in the pecan orchard, outside my fox-proof fence. Okay, Rusty found it and I found him finding it. He was all hackles and growling. I’m guessing he caught a fox scent in the area but that didn’t scare him off the bits of skull he carried home as a trophy.

When he found the lower jaw I thought, “Aha! The bottom half to that scary skull.” (Which, by the way, strengthens my belief that this is a pig’s skull, not a fox skull.)

Nope, 3 feet away was another top half (really, Sherlock has nothing to worry about). 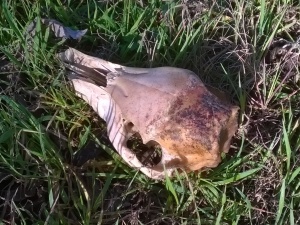 It looks like we have a fast food joint somewhere on the property serving skulls – aren’t we lucky :-}

I'm an American-Australian author, gardener and traveller. Go to my writing website: www.laurarittenhouse.com for more. If you're trying to find my gardening blog, it's here.
View all posts by Laura Rittenhouse →
This entry was posted in dog, Nature and tagged dog, feral fox. Bookmark the permalink.

11 Responses to Where did that come from?