We have two types of watering systems for our chickens.

The first one is the store-bought waterer that keeps the water clean but doesn’t have much depth for them to drink from.

The second option is one Frank made out of an empty milk jug. 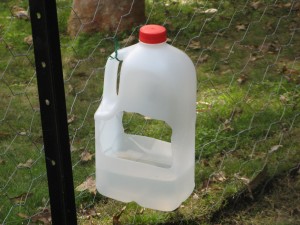 This milk jug waterer has an identical twin. We hang one in the standard chicken run and the second in the holiday-run.

Without a doubt, the chooks much prefer the cheap, but deeper, milk-jug-come-wide-open-drinking-trough. When we open the coop in the morning, they often run to the milk-jug for a good drink even though the store-bought waterer has been in the coop with them all night.

Unfortunately, Isabel is showing signs of being dissatisfied with both types of watering systems. 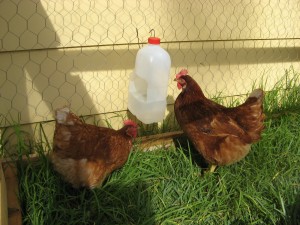 I think she wants one of those nipple drip systems where the chickens can peck at a bottle and a drip of water comes out. Maybe that’s what she had before we adopted her? However she heard of them, she’s taken it on herself to convert the milk-jug into a drip system. When the jug is full (something I strive to maintain – especially since Isabel learned her new trick) she pecks at it and then turns her head upside down underneath it to catch the drips that run down after the water sloshes out. She’ll also stand under it when one of the other hens drinks and really likes it when I fill the jug to overflowing.

Clever chook or as thick as 2 planks?

I'm an American-Australian author, gardener and traveller. Go to my writing website: www.laurarittenhouse.com for more. If you're trying to find my gardening blog, it's here.
View all posts by Laura Rittenhouse →
This entry was posted in Chickens and tagged chickens, installation. Bookmark the permalink.