A volunteer pumpkin vine sprung from the compost in autumn. It finally collapsed and the pumpkins needed harvesting before they rotted and/or were eaten by whatever eats pumpkins (rats and possums at least).

I know exactly one thing to do with pumpkins, that’s to make soup, which I did. A nice batch for me and one for my chickens as well. 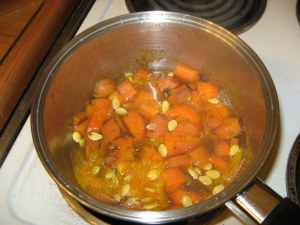 Utilising my standard recipe for pumpkin soup resulted in a lunch that was yummy as ever. Real winter food – warming, hearty and fills the gut.

For my chickens I made some variations. No spices, no cream, no anything besides pumpkin and carrots boiled and blended. They got the pumpkin scoopings which included the seeds but they got their very own carrot. At the end I added in some of their feed pellets (which are full of everything they need nutritionally) and some left over pasta (which my chickens – probably all chickens – love).

It’s been cold outside with the nights dropping below freezing so I thought a warm mash would be just what the doctor ordered. Imagine my surprise and frustration when the dumb birds turned their beaks up at my offering. Lenny tried pulling out a pumpkin seed then a lump of carrot and making his, “I’ve got a great treat here,” sound, only to have the same reception I did.

I suspect the chooks were actually full and not in need of something unless it was amazing – my “soup for seven” wasn’t it. It had been about 3 hours since I took down their morning porridge (boiled up chook feed with oats, yogurt and honey to boost their immune systems – they’re battling winter colds) which was not in evidence when I went down with their new treat. The second problem could have been the lack of yogurt. They love yogurt and I tend to mix it with everything I give them. I thought this “soup” might be special enough without it. I guess not.

Holly did eat some – she eats anything – as did Henny. I’m sure (hope) if I go down in a couple of hours it will all be gone and none of my chooks will admit to eating it. I just wish they’d have liked their “soup” as much as I did mine. It’s a bummer being a chef with such a tough audience – but I’ll persevere. Yogurt for afternoon tea it is.

I'm an American-Australian author, gardener and traveller. Go to my writing website: www.laurarittenhouse.com for more. If you're trying to find my gardening blog, it's here.
View all posts by Laura Rittenhouse →
This entry was posted in Chickens, Garden, Recipe and tagged chickens, pumpkin, recipe. Bookmark the permalink.

2 Responses to Soup for Seven